skip to main | skip to sidebar

How Lucky was I

As you will have read from my previous post, the Sydney Quilt show has been on in Darling Harbour.
Maree had put out a tentative meeting for some bloggers to gather and perhaps have a coffee or a meal. Unfortunately Maree's plans fell through and she couldn't join us (there's always next year Maree)but Janet and I decided that we would still meet.
I felt really privileged to meet the very talented Janet and her DH. We began the evening with a pre dinner drink and then headed to have a meal at Jordan's in Darling Harbour. Jordan's is well positioned and was a short stroll from our original meeting place. I am only sorry now that I didn't take some photos of the city lights. Sydney is so radiant at night with all the lights.
I did manage to take some pics of our meal though as I thought the presentation was amazing.
Three of us had fish of some kind and one had a steak. We all agreed that it tasted as good as it looked, and we washed it down with a great bottle of wine.
During our meal Janet presented me with a present, I was truly surprised and ever so thrilled.
Janet had made me a zippered pouch , in my favourite colours, can you guess, raspberry red of course. On the zip thingy that you use to pull the zip open and close Janet attached a tassel with the prettiest bead on it.
I know Janet put a lot of thought into it and I feel really lucky. Thank you so much Janet.
I have to say the blogging community is very special. 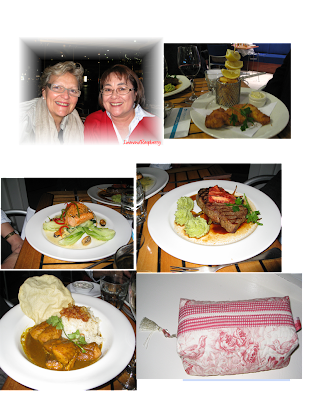 On My Desk This Weekend

Its a long weekend here in the Eastern States of Australia, we are celebrating 'The Queens Birthday'
I am hoping to be able to get a bit of sewing done.
I like to be organised when I sew and my sewing room of late has been nothing short of chaos. I have been sorting and trying to put some order to my fabric.
I have also found some U.F.O.'s , surprise surprise. 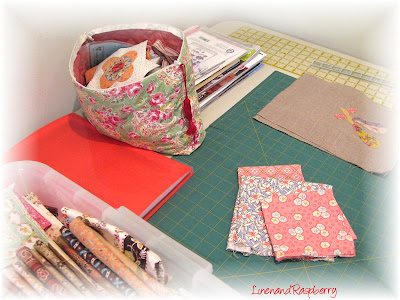 This is something I started some years ago and thought it could be the centre for a quilt.
I still quite like it and even though the circles around the centre are not quite as circular as I would now be happy with , I can easily rectify them. Hmm food for thought, I might add some applique to the corners and then complete it medallion style. 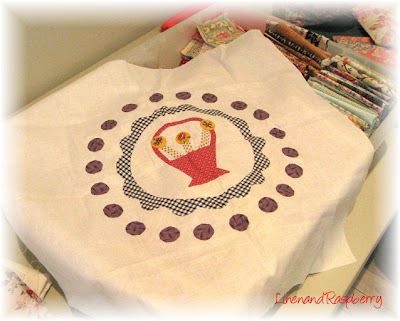 I have also been sorting my fabric , Mr L&R came up with the idea that the low flat storage boxes would be better than the deep plastic storage boxes I have bean using. You know how it is, the piece that you want is always right at the bottom and as you pull everything apart to find it , you have created another mess. This really works a treat , you end up with just one layer and its all there before your eyes. 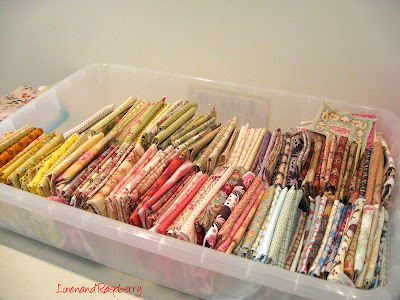 You are aware of your entire stash and looking at this maybe I need a top up of the Mauve's and Purples. ? 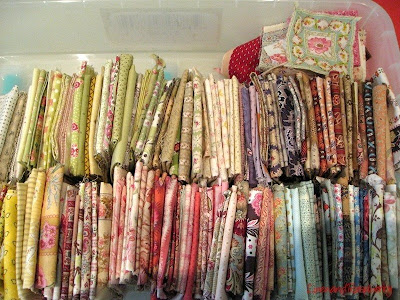 I also came across this, a quilt I began with Bridget Giblin Last year at MO. Bridget is a great teacher, she always encourages one to throw in the unexpected. When I went along to this class I knew I wanted to make the Pickle Dish, the reason being I just wanted to do some piecing as opposed to the applique that I had been doing, however this was not the colour scheme that was in my head. I guess it just evolved this way and it is a little bit out of left field for me.
I need to applique these blocks onto the background and then some pieced borders. I'll keep you posted. 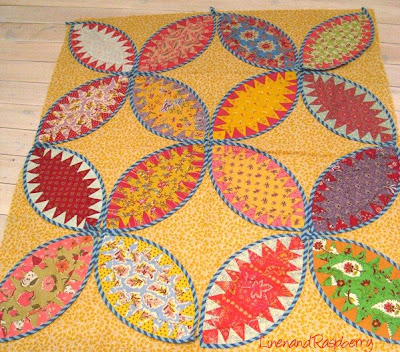 I did manage to use some of my favourite french fabric. 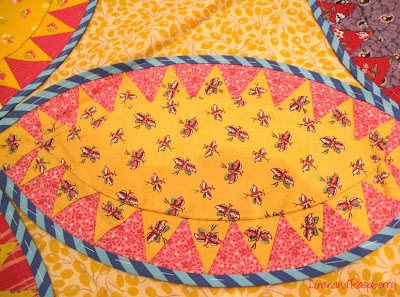 Yellow is also a favourite colour of mine so I have placed the yellow blocks in the centre. 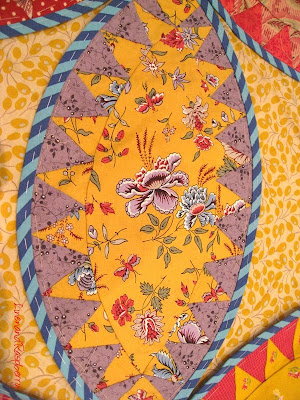 Whoops here is another pic on its side, I have no idea why this happens , don't suppose it matters.
I did fussy cut the little 'pickles' mixing the Solieado print with a Kaffe. 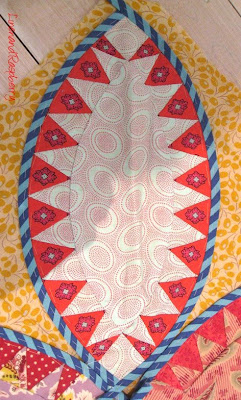 Enjoy your weekend
Until next time
Happy Sewing
j
Posted by jean at 6:16 PM 11 comments

Welcome to Linen and Raspberry

Thank You for taking the time to read my blog. I welcome your comments